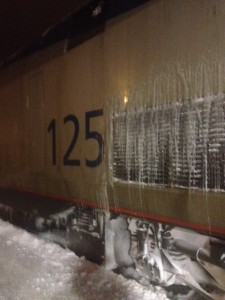 I was back on the rails this week heading up to home office. After my last trip where both my inbound and outbound flights were cancelled due to weather, I didn’t even feign flying to Hartford. I had my Amtrak tickets lined up, my snacks packed and I was ready to read a book and enjoy watching the various landscapes pass by instead of just white puffs of cotton out of a small peep hole.

And then a blizzard hit New England. As much as I’d like to blame someone else, I was warned. First by CNN where countless heads said, “stay home,” “the roads are bad,” “it’s really treacherous out here.” But, I figured, hey – by the time my train rolls up there, it will all be gone. And those New Englanders know how handle snow, right?

I left TRE at 2:45 p.m. and was entering Connecticut around 6:00 p.m. Sure enough, wind was blowing outside and my view mostly included cars covered in snow and barren shopping centers. I switched in New Haven to the “shuttle” – a small, two-car train that goes along the middle part of Connecticut. We were late for sure, but still moving fairly steadily until a huge bump literally made several of us jump from our seats.

What was that? Someone thought we’d hit a skunk because it smelled a little. Someone else thought we momentarily went off the tracks. I thought Anna Karenina had appeared and we’d struck her. Turns out we’d hit an iceberg. Or at least the landlocked version of an iceberg – aka snow.

Snow must be pretty bulky up there because shortly after Berlin, CT, the train stopped. Lights were out and the crew could be heard mumbling about electrical power and circuits and back ups and what not. There was going to be a delay.

Within minutes one of the three crewmen went into a vestibule compartment and retrieved what can only be described as a giant hammer. Probably three feet long with a ten-inch hammerhead.

We’re going to fix the electrical circuits with a hammer?

We’re going to pound our way out of the iceberg?

Well, no big surprise here, but the hammer didn’t work and about 20 minutes later we could tell things were going from bad to worse. Outside was deserted and the few roads we could see were snow covered and barely passable.

The conductor decided it was time to tell us something. “The train is broken. We are going to be sending buses to come take us the rest of the way.”

Buses? Really? It seemed a tad unlikely. So, I did what any experienced female corporate traveler would do when faced in a bind: I went into survival mode. My seatmate complained she was thirsty; I pushed my water bottle to the bottom of my bag so she couldn’t see it.

I opened my Uber app while racing to the vestibule. I didn’t want anyone to hear or see what I was doing because something told me, there was going to be a dearth of Ubers in Berlin. Sure enough there was one lone Uber car about 35 minutes away. I hit the Request button. When I got back to my seat I heard some passengers mumbling about trying maybe to get an Uber car. One said, “Oh, there doesn’t seem to be any.” I was tight lipped.

I won’t bore you with the details of what else transpired but I did in the end cave and offer to share my Uber car to my parched seatmate and I did get out of Berlin and to my hotel in time to make the last call at the Longhorn Steakhouse, which resides next to my hotel.

Zoe is a financial services professional specializing in the Retirement industry, For over 20 years, she has flown around a lot trying to get consultants and other financial services firms to talk to her about putting investment solutions on their "platform"...their short list so to speak.

Zoe can be reached at jzvogel@gmail.com